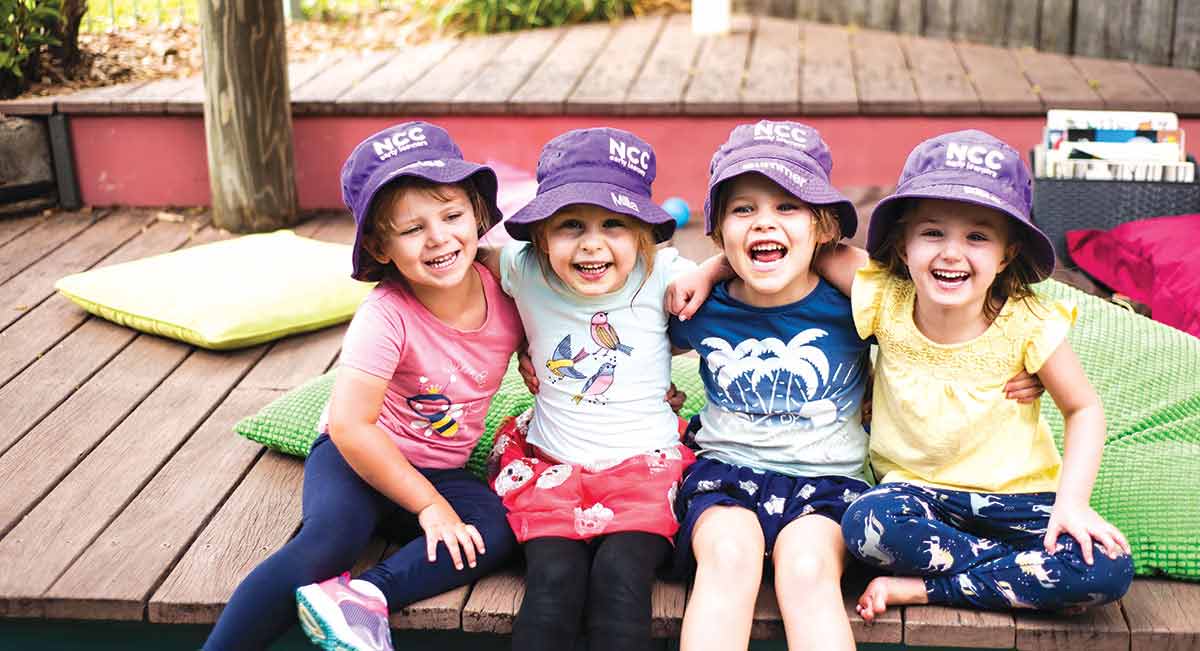 If you have eaten off a menu, admired your silhouette or come to attention, you are using words originating from France. As a language with such a presence in the fundamentals of English, NCC early learners Buderim and Nambour centres have introduced weekly French lessons to their kindergarten rooms.

“NCC chose French as it is one of the ‘romantic’ languages of the world,” says Lisa Brotherson, Director at NCC early learners Buderim. “Romantic languages have similarities to English and help, simultaneously, develop the English language.”

There are also cultural benefits to studying a language, such as expanding a child’s horizons beyond their own cultural experience. “We have noticed it helps to create a sense of identity as well as encouraging multicultural appreciation and honours diversity.”

The program started in February 2018 with Early Learning Languages Australia (ELLA). ELLA is a digital, play-based language learning program for preschool children. “This Australian Government initiative inspires children by driving a genuine interest in new languages and cultures,” says Lisa. “We were excited to jump on board and pioneer the project.”

Sessions are taught in the classroom by  a staff member from NCC, coincidently named Ella!

“Ella is studying French at school and lived in France whilst on a transfer program, so she was well suited to the role,” explains Lisa. “Also, she came to the Sunshine Coast as a child so there is that beautiful serendipity to it. Luckily, with of the ELLA program you don’t need a French naturalist, you just need someone to facilitate the program, who has a passion for languages.”

“I start our French lessons by saying bonjour class, ca va? Which means hello class, how are you,” says Ella. “The class responds with Bonjour Ella, ca va bien!”
Ella teaches the children numbers and colours. They learn the numbers 1-20 in French and make up their own actions to help them remember.

“The children learn a wide range of colours and play different games associated with the colours in French,” Ella says. “The children’s favourite thing about French is reading a book called Pete the Cat, where in the story his shoes change colours. We sing this book together as a class and substitute the colours in the book with the French words. It’s amazing how fast the children learnt all the vocabulary I have taught them so far. I am so proud of my French class!”

The program has led to several other unique experiences for the little learners  at NCC.

“We had a child that moved to France for eight months throughout the year,” says Lisa. “Our children kept in touch with him the whole time and were able to learn new words to communicate. His family were so supportive and kept him involved in our program the entire time until he returned. He got to share all of his French experiences with our children and they were able to gain a deeper understanding of language.”

“It fills my heart with joy when I walk into the kindy room and say it’s French time. All of the children light up and get so excited,” Ella says.

“We sit in a circle, singing and counting together, so that everyone gets involved and expresses themselves, which is what is great about French class. The children also enjoy counting. When we learn a new number, I take turns with who makes up the action for that number. The children get so excited and can’t wait until it’s their week, so they can show the class their dance move!”

Families at NCC early learners have also embraced the program.

“Our families have shared stories of their children using French in their everyday lives, talking about food or colours, saying hello or goodbye or sharing facts about other countries and languages,” says Lisa. “We have a parent who speaks French, who came in to read stories and sing French songs with our children! We love our parents involvement and their ideas and expertise form a key part of our curriculum.”

The program is also available at the other NCC Early Learning Centres, with Nambour teaching French and Withcott teaching Spanish. It is available in the kindergarten rooms and taught is weekly.