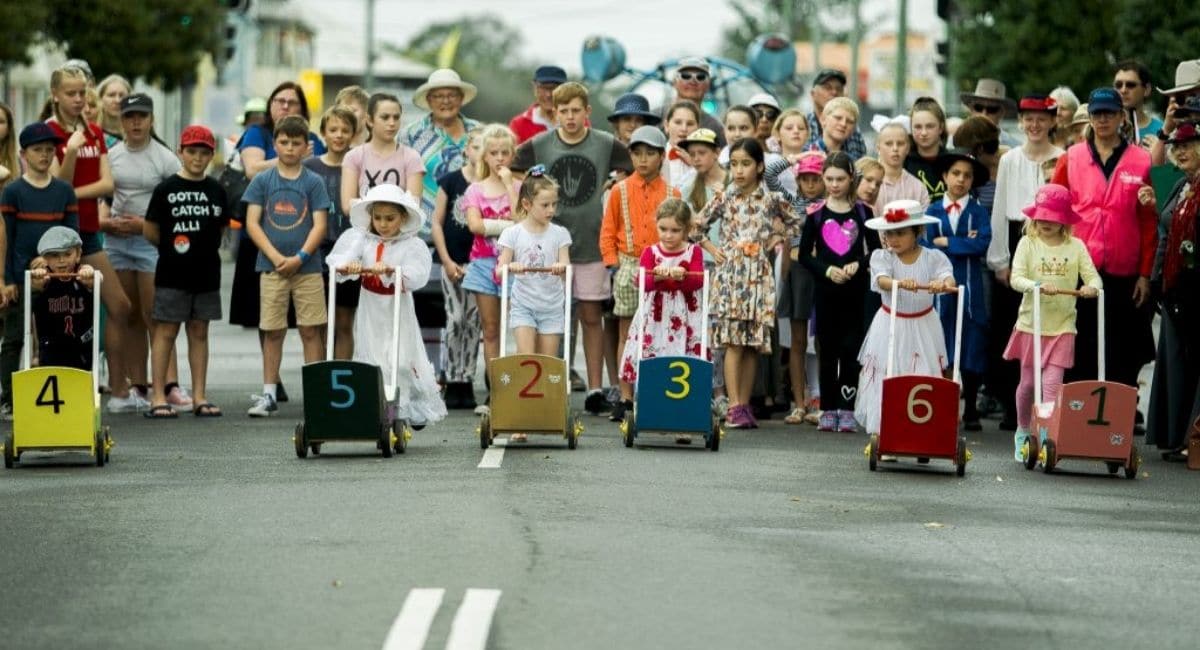 Maryborough’s beautiful Queens Park, riverside parklands and heritage streetscapes come to life in scenes reminiscent of the Mary Poppins stories. Mary Poppins is a magical English nanny who is blown by the East wind to number seventeen Cherry Tree Lane, London and into the lives of the Banks Children. The Mary Poppins Festival honours the author of the Mary Poppins books, Pamela Lyndon Travers, who was born Helen Lyndon Goff in an upstairs bedroom of the former Australian Joint Stock Bank building in Maryborough on 9 August 1899.

The bank is now an interactive museum called the Story Bank of Maryborough, which features prominently in the festival. The festival presents a program of storytelling and activities for all ages through all art forms exploring the ideas of play and imagination.

The adventures that the Banks children have with their outwardly stern but ever-surprising nanny encourage them to explore their imagination and look at the world on a deeper level. She constantly reminds the children that their everyday reality full of meaning, wonder and beauty. The streets come alive, with characters from the novel such as Mary Poppins, Admiral Boom firing his cannon, and other characters. Along with a hive of roaming entertainers, activities, competitions, sidewalk art and street theatre.

The Great Nanny Race, Chimney Sweep Challenge, Costume Competition, and other activities provide a chance for the community to join in with a competitive spirit. The Parade in the Park – Supercalifragilisticexpialidocious, sees the community come together to showcase all the spectacle of the festival’s activities and colourful characters.

The festival celebrates the power of storytelling and sets the scene for visitors to be transformed into their own world of play and imagination.

Location: Maryborough, Queensland
Disclaimer: Though we do our best to ensure all details are up to date, please confirm the event details with the event organiser prior to the date - to avoid disappointment.

Tanya is mum to two teenage girls and is the Production Manager for Kids on the Coast/ Kids in the City. She has experience working in the print & digital publishing industry for a number of years with skills in keeping the production schedule organised, social media and website design. When not being taxi-Mum to her girls, Tanya enjoys camping, reading, digital scrapbooking and boating.