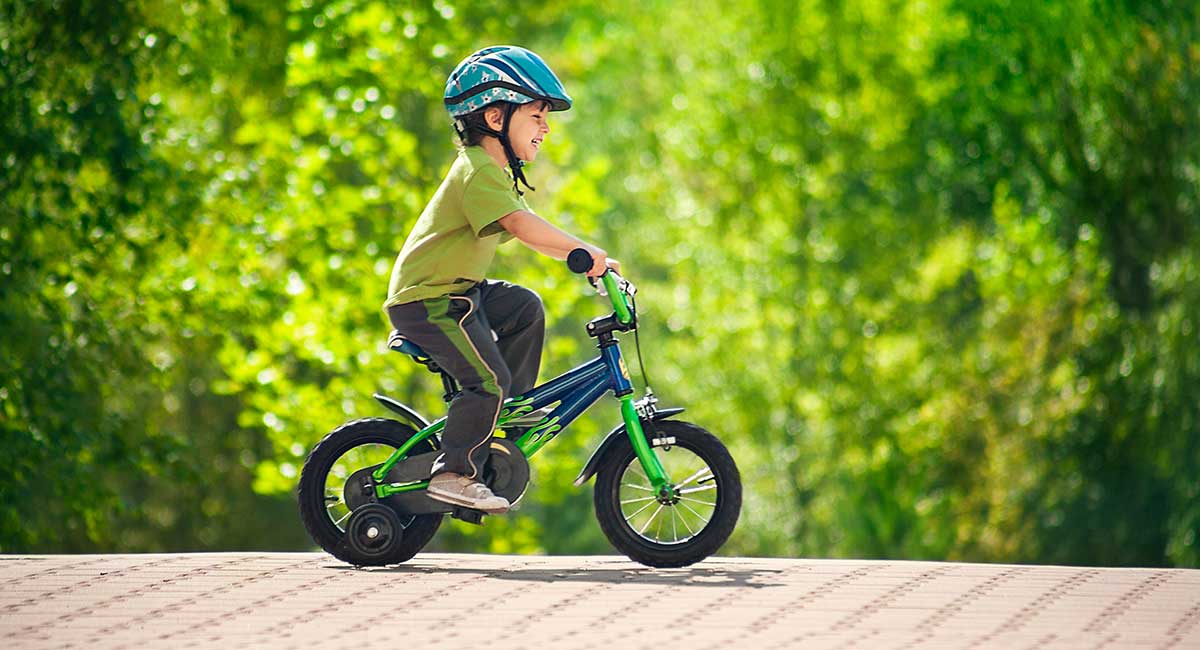 From the city to the shorefront, there’s no shortage of two-wheeled adventures for all ages. Here are our favourite bike rides for kids in Brisbane.

This area has been excellently revegetated with half a million native plants, making this bike ride a great nature experience through bushland and wetland. Choose between a 3 km Billabong Outlook Circuit or an 8 km loop around the wetland. There are also several sets of playground equipment on the way and a large shelter off Wayne Goss Drive.

The Brisbane River has more than 40 km of bike paths but a family friendly stretch starts at the West End ferry terminal in Orleigh Park and includes views across to Toowong and St Lucia, finishing 3 km later under the William Jolly Bridge at South Brisbane. There are playgrounds, picnic and barbecue areas along the way.

This 9 km ride along Bulimba Creek starts in the back streets of Carindale, passing by the shopping mall and winds up at the spectacular Minnippi Parklands. It’s mostly flat except for the odd gentle slope, and is well-shaded along the wide concrete path that passes through scenic wooded glades, meadows, lagoons, and quaint wooden bridges. There’s a great playground at the half-way point or you could turn around there to cut down the journey if little legs are tired.

The Redcliffe Peninsula, just north of Brisbane, features cycle paths that span about 40 km and run almost uninterrupted along its foreshore, taking in some very impressive parks and playgrounds. Clontarf to Woody Point – often called the ‘southern rim ride’ – is a great kids bike ride, with a flat 11 km return path from the Ted Smout Bridge and the Woody Point Jetty.

This cycleway covers about 7 km one way from Chermside West, through Chermside to Geebung. About halfway is the adventure playground in 7th Brigade Park and a road skill training course.

One of North Brisbane’s most popular bike rides for kids, this 16 km track goes from the mouth of Kedron Brook at Nudgee Beach all the way to Keperra. If you have little people, choose the section with Kalinga Park, which is one of Brisbane’s best playgrounds. There’s also a mini road intersection for kids to practice obeying road signs.

This well-visited park has an excellent 5 km one-way path that many families haven’t yet discovered. Leading up to Newstead House, it includes the Riverwalk, which is a boardwalk suspended over the Brisbane River.

This 7 km return cycle path starts at Woolcock Park in Red Hill, which features a sensory playground, barbecues and a modern amenities block. From here, it follows Ithaca Creek, so ducks and water dragons are good possibilities of being spotted.The track is mostly shaded and avoids traffic, except from one short section on a quiet side road. It’s an easy ride for all abilities, but energetic kids may enjoy ripping up a small trail bike area which pops up around the half-way mark.

Behind Springfield Central’s Orion shopping centre is one of Ipswich’s most loved natural destinations – Robelle Domain. About 11 km of high quality bike paths are beautifully landscaped with lots of signage so you can’t get lost. The pathways take you past cascades and ponds, water play parks and state-of-the-art play sets for kids and adults. This is a popular spot, so be prepared to share the bike path.

Take this scenic 6 km bike ride for kids along the historical foreshore of Sandgate along the waterfront and all the way around the cliff base to the Shorncliffe Jetty. Visitors find picnic grounds and playgrounds along the way, including those at Lower Moora Park which has a lovely heritage-listed jetty for a breezy pit-stop.

Jamieson Park is the best starting point for this 7 km waterfront ride, which winds its way around an isthmus, caravan park and Morgan’s Seafood before finding its way back to the seafront again. You won’t find a lot of shade on the way, but there are spectacular Glass House Mountain views and a few good spots for a picnic and play such as Little Jamieson Park and Scarborough Park.

Starting at Waterloo Esplanade in Wynnum, this 10 km return trip runs along the shoreline all the way through to the Manly marinas. Whether you start or finish at the Wynnum end, the big attraction here is the Wynnum Water Park, which includes a wading pool and an ‘aquativity’ space, where sculptured whales squirt water high into the air like a giant backyard sprinkler. There are plenty of cafes and fish’n’chip shops to refuel as well as picnic shelters, playgrounds and toilets along the way.