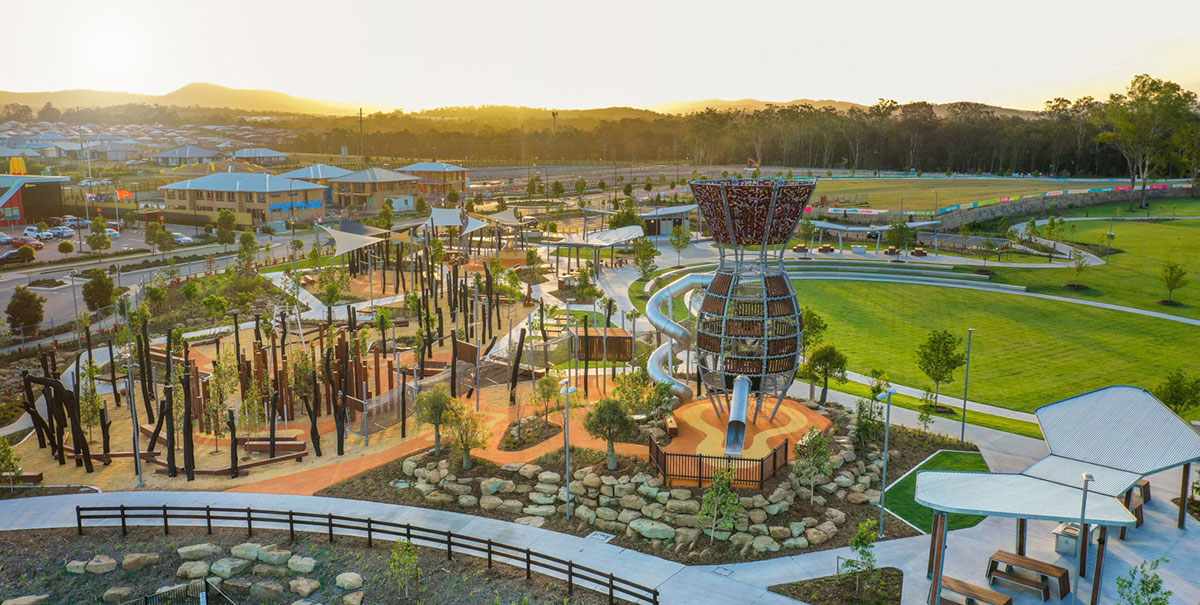 The best new park in Queensland 2020

With two state awards now under its belt, it is official – Gainsborough Greens in Pimpama is home to the best new park in Queensland.

The $7.5 million Bim’bimba Park, completed by developer Mirvac in conjunction with City of Gold Coast, has taken out top honours in the Parks and Recreation category of the 2020 Urban Development Institute of Australia (UDIA) Queensland Awards for Excellence.

Gainsborough Greens also came out on top for Community Engagement Excellence at the Awards, considered the premier development industry accolades in the State.

Mirvac Head of Residential, Stuart Penklis, said the developer always set out to create a park that would become an asset for the northern Gold Coast community and a destination in its own right.

“We undertook significant engagement with our Gainsborough Greens residents and the broader community to really understand what they wanted in a new park – and we delivered on those wishes,” he said.

“We also worked closely with City of Gold Coast throughout the entire process.

“We know we hit the mark with Bim’bimba Park by virtue of the fact it is always bustling with residents and families from early morning right into the evening, and to receive recognition from the industry on the quality of the design just solidifies that success.”

Bim’bimba Park features the highest structure in the entire suburb of Pimpama – a 14 metre high play tower, inspired by the bulging form of the Australian bottle tree – which is surrounded by a nature based playground with recycled timber play equipment and artistic elements, including 110 wooden totems.

The five hectare green space is described as one of the most feature-packed in the region, including play, sporting, entertainment and fitness facilities, with multi zones to engage people of all ages and abilities.

Mr Penklis said Mirvac’s community-led approach to the design was in-line with its philosophy for the broader Gainsborough Greens masterplan.

“We are thrilled to be recognised for our community engagement, because it is a large part of what makes the Gainsborough Greens community so special,” he said.

“We are always interested to hear how residents believe we can make our community even better and this feedback has been the cornerstone of the design of numerous projects throughout Gainsborough Greens, including all seven of our parks and other public spaces.

“We also have a dedicated community engagement team, Enriching Communities Pimpama, which hosts a regular calendar of events and activities, from coffee catch-ups to Christmas light competitions and movie nights, to ensure our residents have plenty of opportunities to connect and get to know their neighbours.”

Gainsborough Greens was not the only Pimpama community in the spotlight at the UDIA Queensland Awards, with neighbouring over 50s lifestyle community, Halcyon Green, also taking out two awards, after being named the State’s best Master Planned Development and best Seniors Living Development.

“It is a huge achievement for two neighbouring communities to take out four of the 21 awards presented and shows the quality of development happening in the Gold Coast’s fast growing northern corridor,” said Mr Penklis.