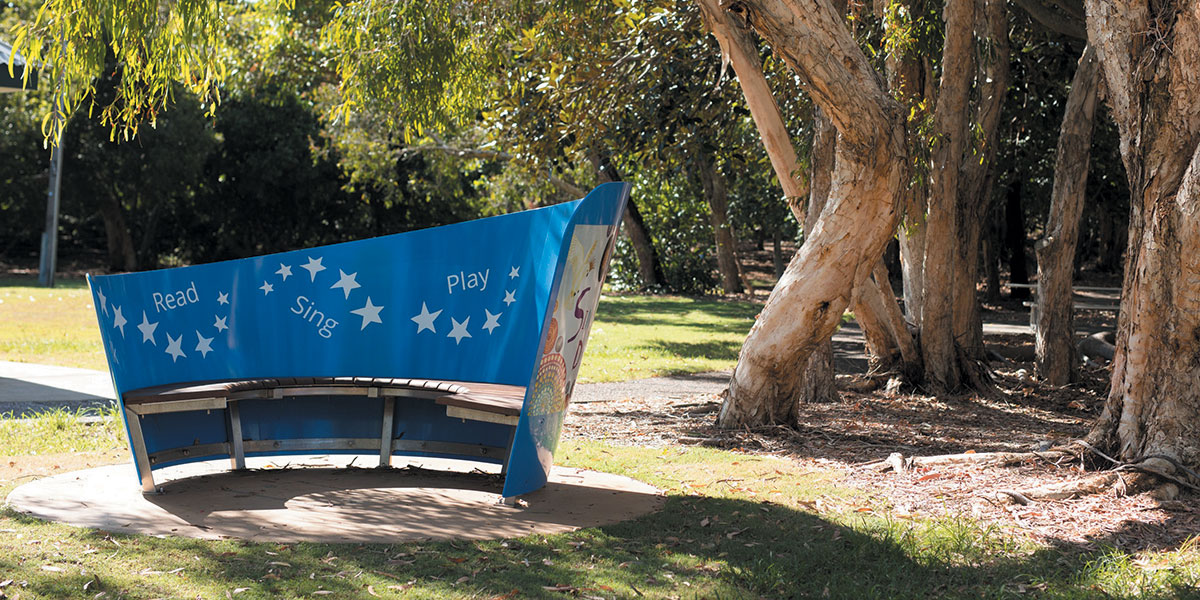 Published in 2016 by Magabala Books Aboriginal Corporation, Mad Magpie tells the story of Guluu, an angry magpie who is teased by a gang of butcher birds.

The book is written by Gregg Dreise, who is a descendant of the Kamilaroi tribe, from South-West Queensland and North-West New South Wales and now a teacher on the Sunshine Coast. His books have appeared on the Premiers Reading challenge and have also won the Speech Pathology Australia Award.

“Families with children under five are invited to head to Power Memorial Park to explore the magic of storytelling at the purpose-built story seat,” Cr O’Pray said.

“The story seat is a colourful, engaging and positive way of encouraging parents and caregivers to play a proactive role in the development of their child’s early literacy skill from 0-5 years.”

“The aim of this universal family literacy program was to support strong language and literacy environments for young children from 0–5 years and their families,” Cr McKay said.

“We have already implemented a number of activities under this program and we are now installing colourful story seats in parks across the region which will be a visible way of promoting literacy inviting families to engage in storytelling, active play, singing and reading.

“The seats, designed by council’s Parks and Gardens area, reinforce the message, ‘the first five years last a lifetime’.”

Story seats will be rolled out progressively across the region in the following parks:

Families are encouraged to grab map and head off on an adventure to find all 10 story seats. On your adventures, take a picture with the seats and share on social media using the hashtag #Storyseat.

First 5 Forever is a universal family literacy program aimed at supporting stronger language and literacy environments for young children from 0 to five years and their families. The program is funded by the Queensland State Government and is being delivered by 320 public libraries across Queensland.