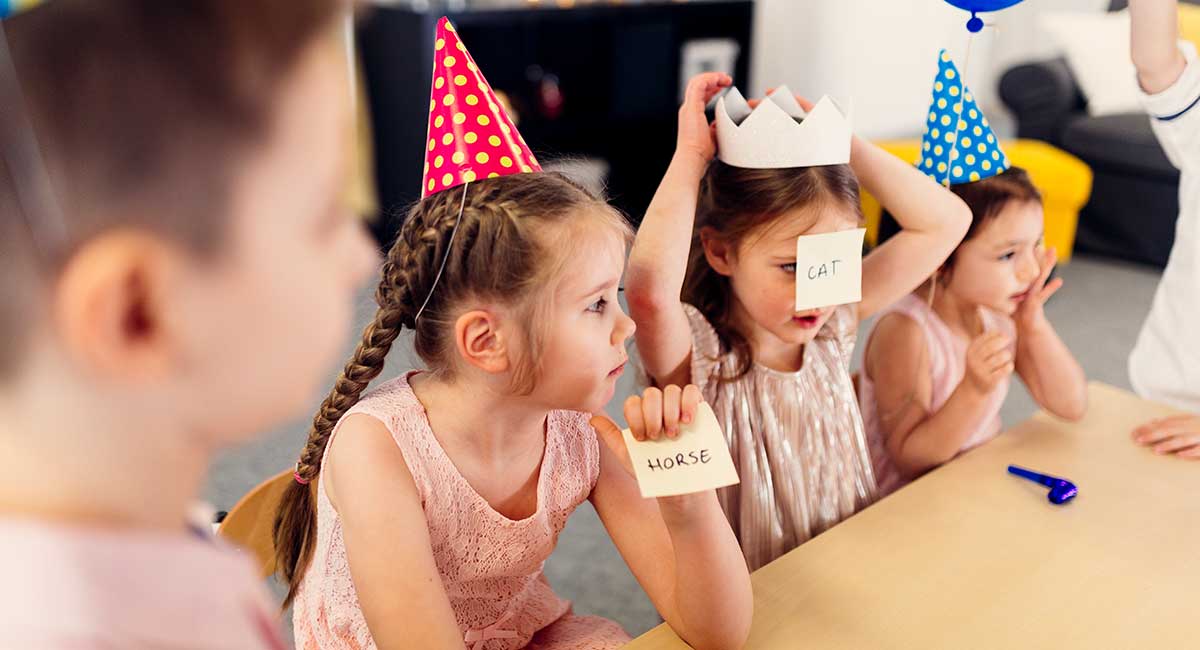 Entertaining party games for kids that won't cost you a cent

Party games are the cornerstone of any child’s birthday party. The kids can burn off some energy, games give the party some structure and, of course, everyone has a lot of fun!

There’s no need for complicated games or expensive prizes. Here are our favourite kid’s party games that won’t cost you a cent (other than a couple of lollies or trinkets, of course!).

The great thing about this game is that it can easily be adapted to different themes — for example instead of a ‘dog’ and ‘bone’ it can be a ‘pirate’ and a ‘treasure’ or a ‘princess’ and a ‘crown’.

The children sit in a circle. One child sits in the middle with his eyes shut and a ‘bone’ (cardboard is fine) behind him or her. The adult points to one of the children in the circle, who then has to sneak in, grab the ‘bone’ and put it behind his back.

All the kids now put their hands behind their backs and say “Doggie, doggie, who’s got the bone?” The child in the middle (who is the ‘dog’) opens his eyes and gets two guesses to try to and choose who has the ‘bone’. If the ‘dog’ guesses correctly, he or she gets another turn. But (as will more than likely be the case) if he doesn’t, the child with the bone becomes the new ‘dog’.

The children all sit in a circle. One child is chosen to put his head down and close his eyes. The adult in charge then points to one of the children in the circle who says “Who am I?” The child with their eyes closed can open them and try to guess who it was. If they guesses correctly, they have another turn.

One child (or the adult in charge) calls out the name of an animal and everyone has to move around like that animal would move. When the leader calls out “Sleeping [name of animal]” everyone has to drop to the floor and lie still with eyes shut. Anyone that moves is out—they can then become one of the judges.

If creating balloon animals out of those long, thin balloons is too hard, blow up a balloon for each child and then, on the count of three, everyone points them skyward and lets them go! See whose balloon goes the highest! Make sure you collect them all afterwards.

Set up a table with an upturned plastic cup on one end, and a small (wrapped) chocolate or lolly placed on top. Take the kids to the other end of the room or yard (about 3 metres away) and give the first one a broomstick.

Tell them to hold the broomstick with both hands and put their head up against it so they’re staring at the ground. Then they have to quickly turn around four or five times, keeping the broomstick touching the ground in the middle, until you say “now”.

You then grab the broomstick and the child has to walk quickly to the table and try to pick up the chocolate without knocking it over.

There may be a few spills and tumbles so if you play this game indoors, make it on a soft floor and allow plenty of space!

Everyone stands up, play some music and everyone must dance. When the music stops, everyone must freeze. Anyone that moves is out and they become one of the judges.

Get enough chairs for everyone in the party to sit down and place them in a row. Alternate which way each chair is facing. Then take the end chair away. When the music starts, all the children walk around the row of chairs. When the music stops, everyone must sit down. The one child left standing is out and becomes one of the judges.

Ahead of time, buy a simple prize and wrap it in a layer of newspaper. Continue to wrap it in single layers of newspaper until you have a nice, big parcel. At the party, sit the kids in a circle and start the music. Children pass the parcel to each other in a clockwise direction. When the music stops, the child holding the parcel removes a layer. This continues until the last layer is removed. The child holding the unwrapped prize wins!

Always a party favourite, pick up a piñata from the local party or dollar store, pop some lollies in, hang it up and then let the kids take turns trying to burst it by hitting it with a broom handle.