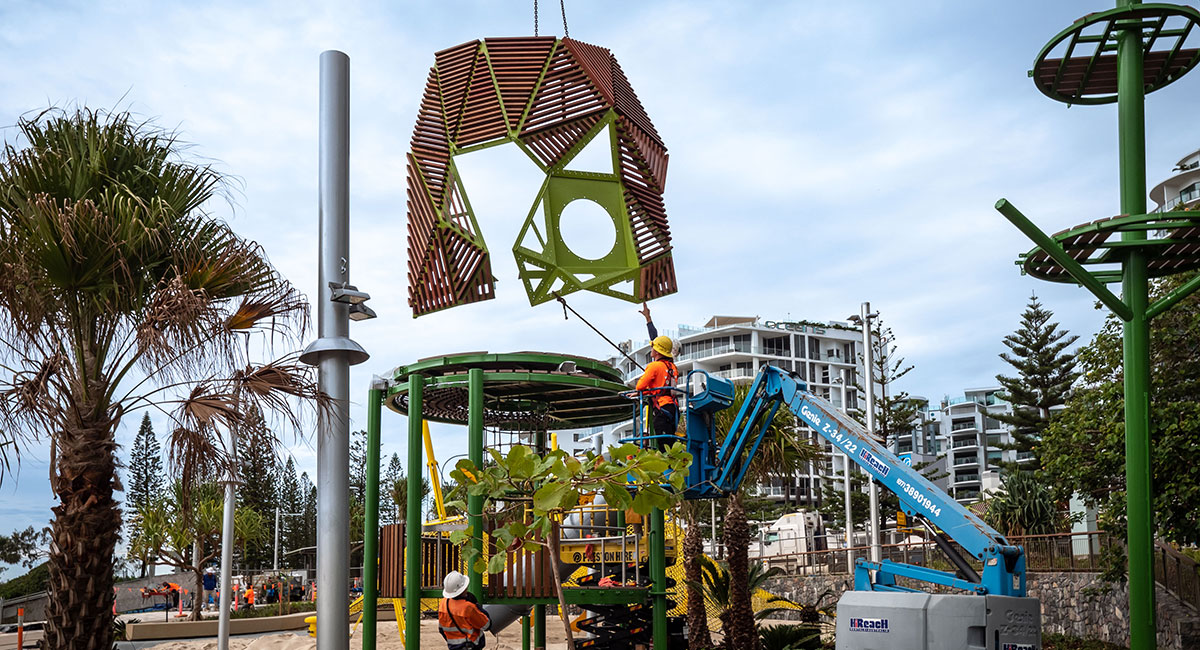 The MooloThe wait is almost over! Mooloolaba’s Northern Parkland will open for the Queensland school holidays, featuring a vibrant and free community event on Saturday, July 2.

Organised by the Mooloolaba Chamber of Commerce with the support of Sunshine Coast Council, the Mooloolaba Foreshore Festival will celebrate the grand opening of the Northern Parkland with live music, markets, family-friendly entertainment, and more.

The announcement comes as the final pieces of the Northern Parkland’s adventure playground, the impressive ‘Pandanus Towers’ and slides, were crane lifted into place on Monday, June 6.

Sunshine Coast councillor Joe Natoli says the playground will be a huge drawcard for residents and visitors.

“There’s really nothing else like it on the Sunshine Coast,” Cr Natoli says.

The highly anticipated Northern Parkland for Stage One features a striking new boardwalk and viewing platform. It links Alexandra Headland to the Mooloolaba Esplanade.

Cr Natali says he is excited to see the Northern Parkland nearing completion.

“There is an incredible adventure playground, beautiful parkland, new picnic and barbecue spaces, and unencumbered ocean views from every angle,” he says.

“It’s yet another great reason to visit Mooloolaba.”

All things in, on and under the sea inspire the Mooloolaba Foreshore Festival. It will feature all the latest parkland additions, including an epic adventure playground, oceanfront picnic and barbecue areas. Visitors will also have access to the premier viewing decks for those magic photo moments.

At ‘Ocean Alley’ on the Esplanade, there will be ocean displays and workshops. You’ll also find delicious food, free rides, face painting and activities for everyone to enjoy.

Mooloolaba’s Northern Parkland is the first new community space to be unveiled as part of the multi-stage Mooloolaba Foreshore Revitalisation project.