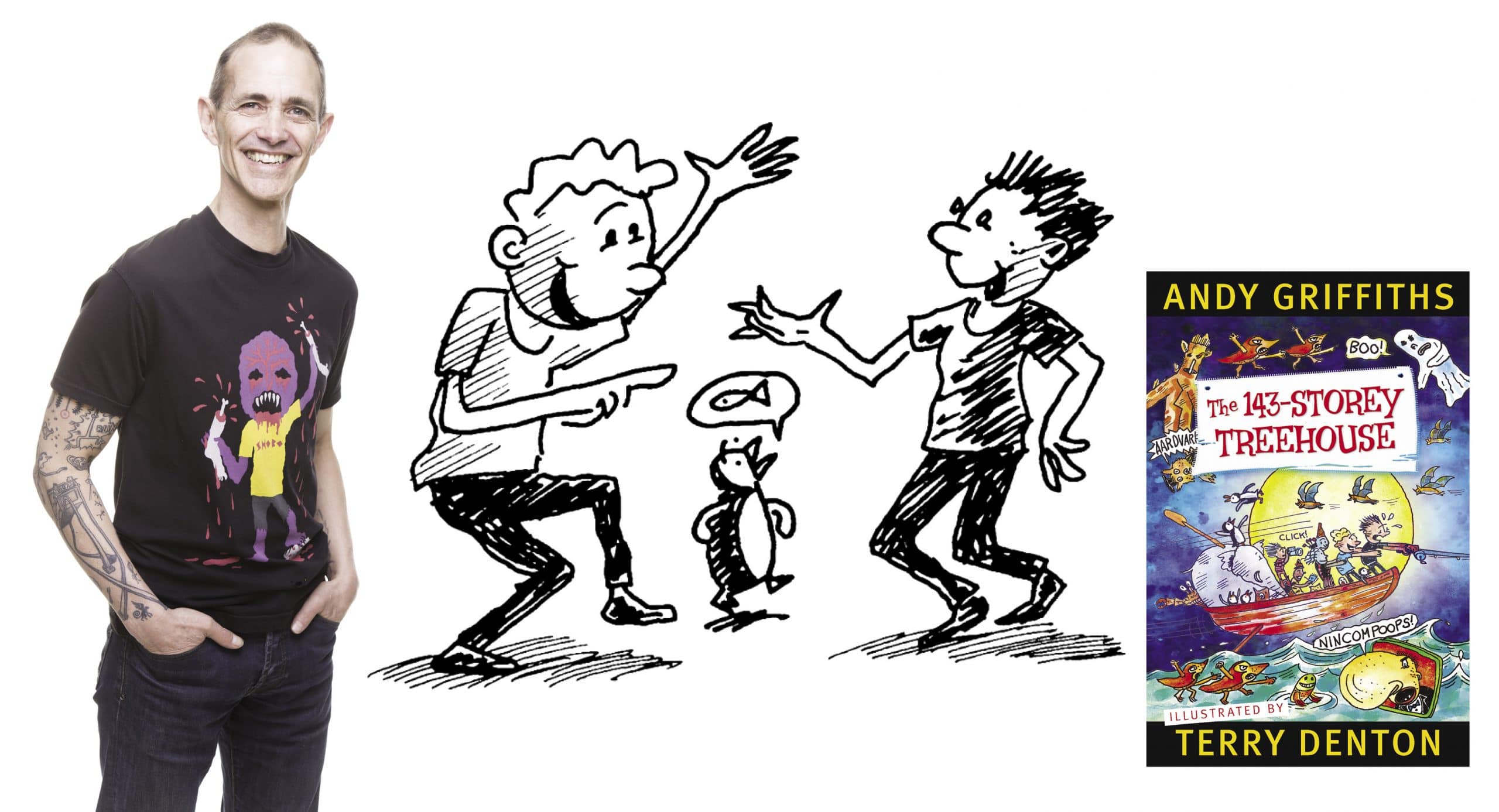 The minis find out the secrets of the 143 Storey Treehouse

With the release of The 143-Storey Treehouse, our mini editors (and huuuuuge Treehouse fans) chat with Andy Griffiths to find out the truths behind the treehouse.

Kids: What sparked the original idea for the treehouse, so many years ago?

Andy: We were working on a book called The Very, Very, Very Bad Book but we’d kind of run out of very bad ideas so I suggested to Terry that we write a very, very, very bad book in which Terry and I appear as characters and waste the reader’s time for the entire book telling them why we couldn’t write the book. I figured we’d live in a very bad treehouse with a shark tank, which people fall into and a bowling alley where bowling balls fall out of the tree on top of the heads of passers-by. I asked Terry to draw this and he ended up drawing a 13-storey treehouse that, while dangerous, also looked like the most magical and fun place to live.

Kids: Did you ever imagine you would be up to 143 storeys when you first started the treehouse series?

Andy: Not for a moment! We’d been writing a series of experimental books where we played with different combinations of text and picture. The 13-Storey Treehouse was an experiment to see if we could tell a long-form story using the pictures to tell the story as much as the words. When we’d finished it we knew we’d written an unusual book but we couldn’t have guessed how popular it was going to become. Our readers soon began asking for another Treehouse book so we decided to add another 13 storeys—which gave us lots of ideas for a whole new story—and we’ve just kept adding 13 storeys every year since then. The treehouse has a magical quality that just seems to allow us to improvise new ideas and storeys and stories endlessly.

Kids: How many storeys are you going for?

Andy: Well we started with 13 storeys and each book has 13 chapters and adds another 13 storeys so it would be really cool to write 13 books—which means 169 storeys.

Kids: What gives you inspiration for each book?

Andy: I keep myself inspired by reading books, listening to music, watching movies, daily exercise and keeping a journal in which I note down random thoughts and observations. This means that my head is filled with lots of ideas when I sit down to write. And a small idea for the next book always seems to appear as we get near the end of writing the current book. It could be a level, a character or some other idea that I think, wow, that would be really fun to explore … and before I know it we’re exploring it and a new book starts to come together.

Kids: Are some of the books based on real life?

Andy: Well, it is true that Terry and I have written many books together, and we often get distracted because we’re having so much fun, but those distractions, like the ones in the book, often get incorporated into the story. It’s not true, however, that our publisher has a big nose. We often take a small true incident and exaggerate it out of all proportion until it becomes MUCH more entertaining and dramatic than real life.

Kids: Is Terry a good inventor in real life?

Andy: When he has a pen in his hand, he is endlessly inventive. Ideas just flow out of him—it’s like he’s thinking through the pen. He seems to be able to draw anything I ask for, such as a set of never-ending stairs that runs for more than twenty pages. He’s also very patient. And very funny.

Kids: Would you like any of the machines in real life — which one and why?

Andy: I’d like a Once-upon-a-time writing machine, please. In real life it takes us an entire year to write a book—there’s a LOT of re-writing and re-drawing but a machine like this could do all the work for me, in a few short hours.

Kids: Is Jill real, and does she actually have all the animals?

Andy: Jill IS real and in real life we are married. She is an editor and she edits and co-writes the books with us. She helps us solve all the problems with our story, just like she helps solve all of our problems in the book. And yes, she really does love animals and can often be seen helping a worm off the footpath and back into the dirt, or rescuing an insect from a puddle.

Kids: Do you have a real treehouse at home?

Andy: No, but for a time we lived in a three-storey townhouse and when Jill, Terry and I were working there it felt like we were in a treehouse playing imaginary games like I used to play in my cousin David’s treehouse when we were little. But I spend so much time thinking about and writing stories about our 143-storey treehouse it FEELS quite real to me … well, real in a dreamlike way.

Kids: Does your publisher actually have a big nose?

Andy: No. In real life she’s a very nice, small-nosed woman called Claire who never loses her temper and never yells at us. We look forward to her phone calls!