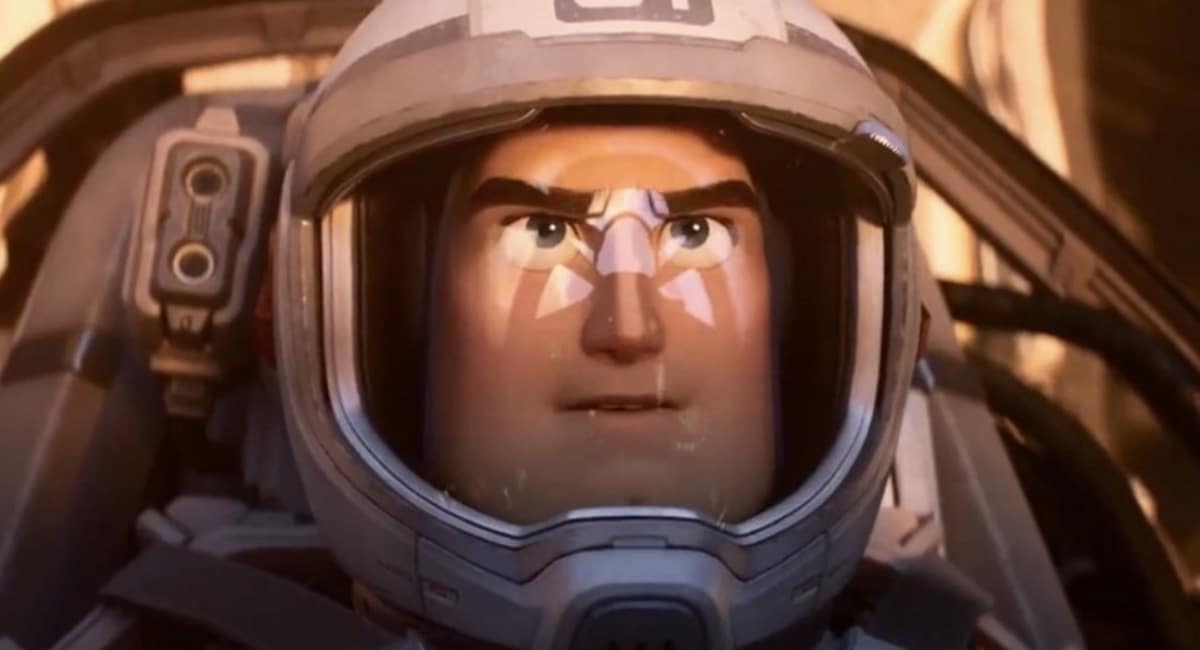 As darkness descends around the cinema, the opening of Pixar’s latest film Lightyear wants it made clear from the get-go. “In 1995 Andy got a toy. The toy was from his favourite movie. This is that movie.” If you came into the movie theatre thinking this film is a story about Buzz Lightyear, the toy, you are wrong. What’s great about this opening is that Pixar is placing this unique origin spin-off neatly within the Toy Story universe while also freeing it up to stand as its own adventure. That it’s a fiction within a fiction is quite clever and a bit of fun!

Expect time-travel, space-ranging and animated adventure that lives up to the spirit of classic science fiction. Bombastically voiced in the Toy Story franchise by Tim Allen — and now Chris Evans (Captain America) — Buzz Lightyear is every bit the long-jawed and fired up spaceman we expect him to be. What is especially pleasing about Lightyear is that there is no shortage of thrilling adventure. Pixar also delivers heart-warming and genuinely funny moments throughout.

As Buzz Lightyear, Evans delivers the same catchphrases as the original, toy Buzz. However, this Lightyear is on his own journey and his personality shines through. We see him as a civilian with his ruffled short brown hair. It’s a glimpse of his boyish nature, which makes it feel as though Buzz is just like us.

He and his commander/best friend Alisha Hawthorne (Uzo Aduba, Orange is the New Black) are a great team on the field as space rangers, exploring new planets and surviving angry alien monster attacks side by side. But Buzz is short on patience for rookies and has a tendency to carry too much responsibility on his shoulders.

When Buzz accidentally crash lands his colony’s space ark on a hostile planet, he vows to fix his mistake. How he does this is a bit confusing, but it involves numerous attempts to engineer a sufficiently powerful crystal to fuel his ship and reach hyperspeed as he sling-shots around a star … Or something like that. The long and the short of it is this, with each attempt he jumps several years into the future. He goes so far that on his final return he discovers a new generation of commanding officers who tell him it’s time he makes the best of the situation.

As if that happens. Buzz finds himself teaming up with a ragtag group of volunteers and Alisha’s grown-up granddaughter, Izzy (Keke Palmer) to fight the evil Emperor Zurg (James Brolin). It’s here the characters of Mo (Taika Waititi) and Sox (Peter Sohn) really steal the show.

Visually, Lightyear is nothing short of spectacular. Pixar consistently delivers, so it’s easy to take the animators’ and artists’ for granted. It’s in the little details, such as the way food jiggles in the tray and the texture of hair on Alisha and Izzy. But the bright colours and detail of the flashy space adventures make it hard not to marvel. There is one scene towards the end of the film that captures the terror of the vastness of space so realistically I had to grip my armrests tightly. Well worth seeing this film of the big screen!

What’s more subtle are the themes of Lightyear. There are the usual issues of friendship and family, but you’ll also find the challenges of dealing with one’s self-worth and identity.

Overall, Lightyear has enough of the feel good fuzzies to remind you that it’s a member of the Pixar club. It’s entertaining and is sure to keep kids and adults engaged.

Lightyear is in Australian cinemas from June 16.